Tempt Me With Darkness (Doomsday Brethren, #1) by Shayla Black 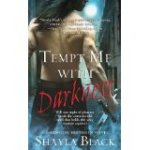 As soon as Marrok sees Olivia Gray’s dark windswept hair and burning violet eyes, he’s sure they’ve met in eons past. He’s felt her soft gentle curves writhing in pleasure beneath his own hard powerful body…Morganna! For centuries, towering Marrok, once the mightiest of King Arthur’s warriors, has endured a terrible curse cast upon him when he spurned the witch.

She’s a modern woman about to discover ancient magic….

Olivia shares a mystical — and irresistible — connection with brooding Marrok. Soon after the sexy warrior appears in her erotic dreams, he abducts her, demanding she uncurse him. Their intense passion is more powerful — and intimate — than either of them has ever known. Olivia may be the key to unlocking the diary that will break Morganna’s hold on his life. But in the wrong hands, the book also holds the power to destroy all magickind. As they search for answers, a ruthless wizard returned from exile is building an army of evil. When he discovers Marrok and Olivia have the diary, only their love — with the help of a powerful group of magical Brethren — can save them. (from Amazon)

I actually read this book for the first time almost a year ago exactly.  There are now four books in the series and it was time for a re-read.

I have purchased and read other books by Shayla Black, but this is the only series I truly enjoy.  I really like the tie-in to the Arthurian legend although you do not have to be a major fan to understand these books.  She explains enough of the back history to keep things clear.

There were a couple of what I think of as cliches for male immortals.  Marrok is 1500 years old, but is terrified of riding in cars and has never learned to drive.  I don’t think a warrior would have limited himself that way.

Also, even though he uses a cell phone, he has no clue regarding computers.  I mean really . . . he lives in the middle of nowhere without any means of transport and he’s not even online??

It doesn’t matter.  The series is good anyway.  There are a number of characters which can be hard to keep straight with several unexplained (so far) back stories going on.  The endings are not quite cliff hangers, but critical issues are left unresolved.  That is why I keep reading them (and re-reading them) I imagine.

Now on to book two:  Seduce Me in Shadow.